Cayman National Corporation was set up in 1974 and has provided its customers with a comprehensive range of domestic and international financial services. Its portfolio of clients range from wealthy individuals and their families through to entrepreneurs, smaller companies, investment business, financial intermediaries and charitable concerns.

We decided to prepare a case study based on these files, since they are real company data, not just some better or worse synthetic benchmark - and, at the same time, these files are publicly available, so anyone can download them and verify all results presented below.

Overview of the files

Let's take a closed look at the files. Each image has from 1 to 3 NTFS partitions inside - always exactly 1 "main" partition, and possibly some additional boot partitions. In the below table, we just added up files and megabytes from boot partitions into main ones.

What drawn our attention, was quite high percentage of used space on several drives. This issue is shown in this diagram: 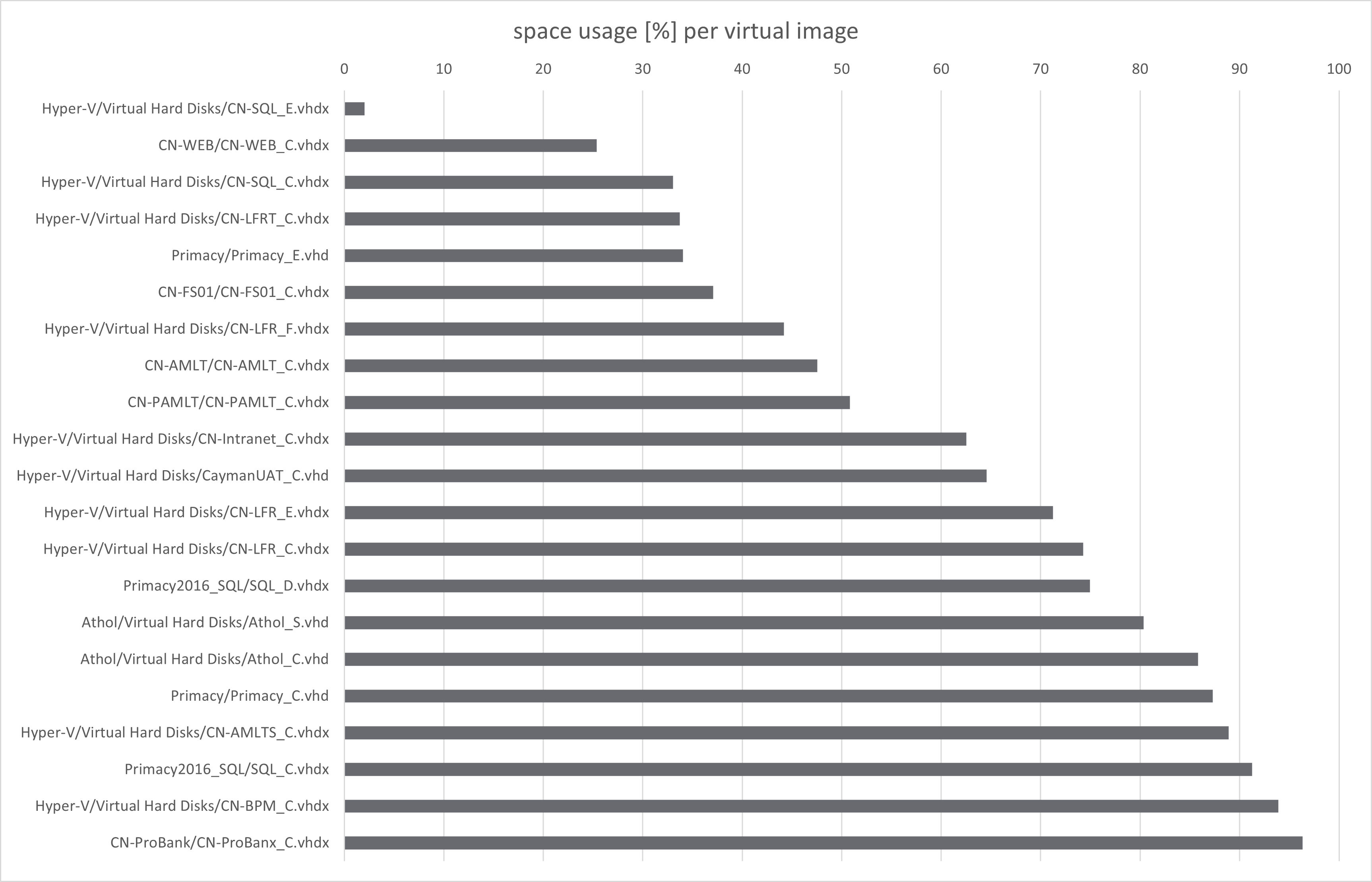 As we mentioned above, 4 virtual drive image files were broken, in 3 different ways:

The below diagram shows the compression ratio of these images:

From our other tests, it looks that these compression ratios are quite representative (for lz4 -1 compression method):

How much space is saved using Drive Badger?

One of the main advantages of Drive Badger over competing solutions, as well as scripts made ad-hoc, is the performance of the exfiltration process, understood as both speed, and reduced amount of data required to copy to target drive.

Let's now break down 2.92 TB of the original data (excluding broken containers) into: 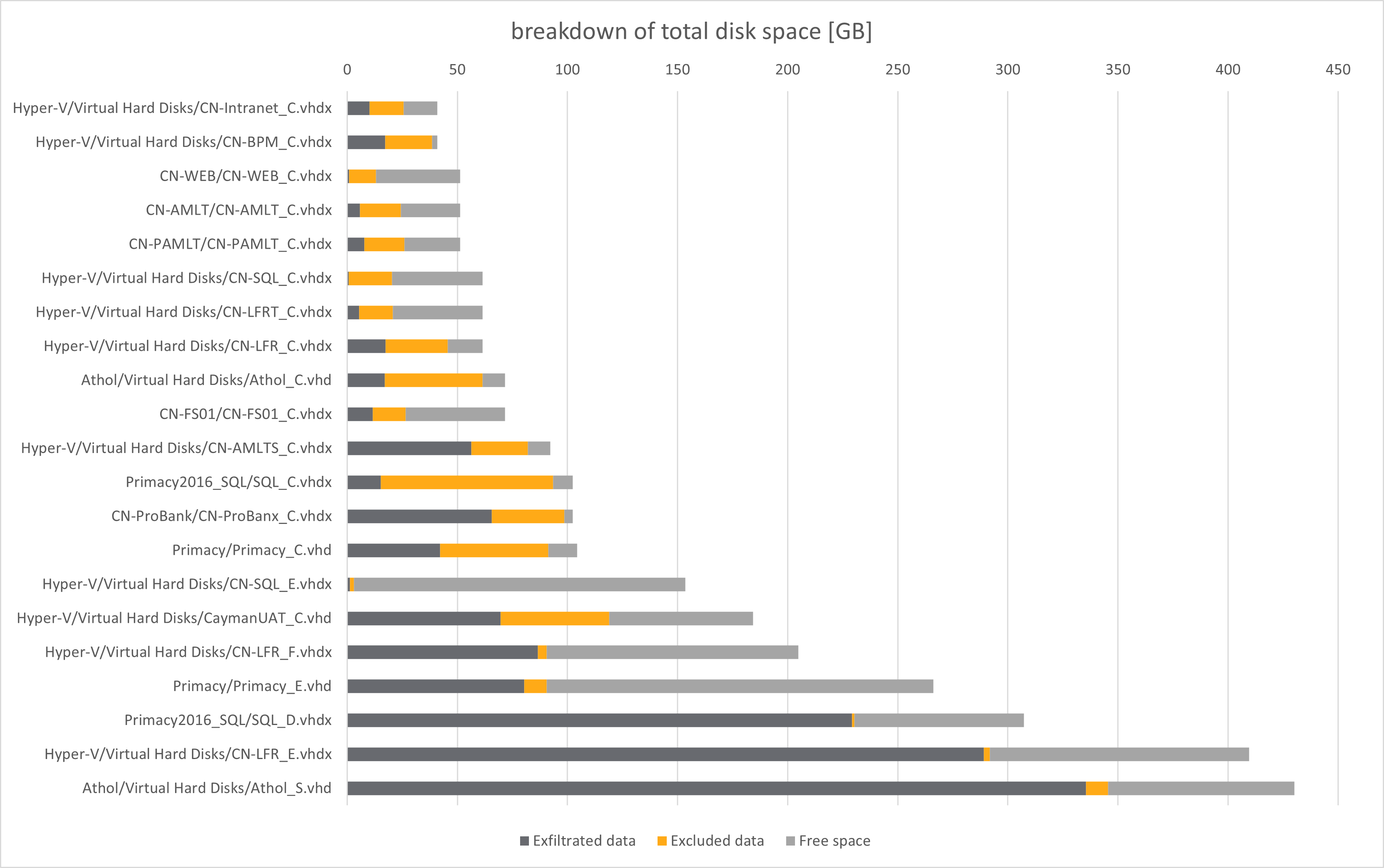 Of course, as it is shown on the diagram, the exfiltrated to excluded data ratio differs between containers.

In general, a fresh installed Windows, without any user generated files, or additional installed programs, requires less than 1 GB of space for exfiltration - since most Windows internal files, and many other groups of files repeatable between computers (eg. Adobe Reader, antivirus databases etc.), are excluded by the exclusion rules (the yellow parts on the diagram).

So, the dark grey parts of the diagram represent:

Particularly in Cayman National case, most space is required for:

From files mentioned above, Microsoft SQL Server databases and Outlook PST files are very big - typically multiple gigabytes per file. However, document scans (especially created by Laserfiche software) are very small files. On the other side, there are lots of them - in fact, 87.4% of all exfiltrated files, or 70.2% of all source files, belong to Laserfiche DMS data volumes. 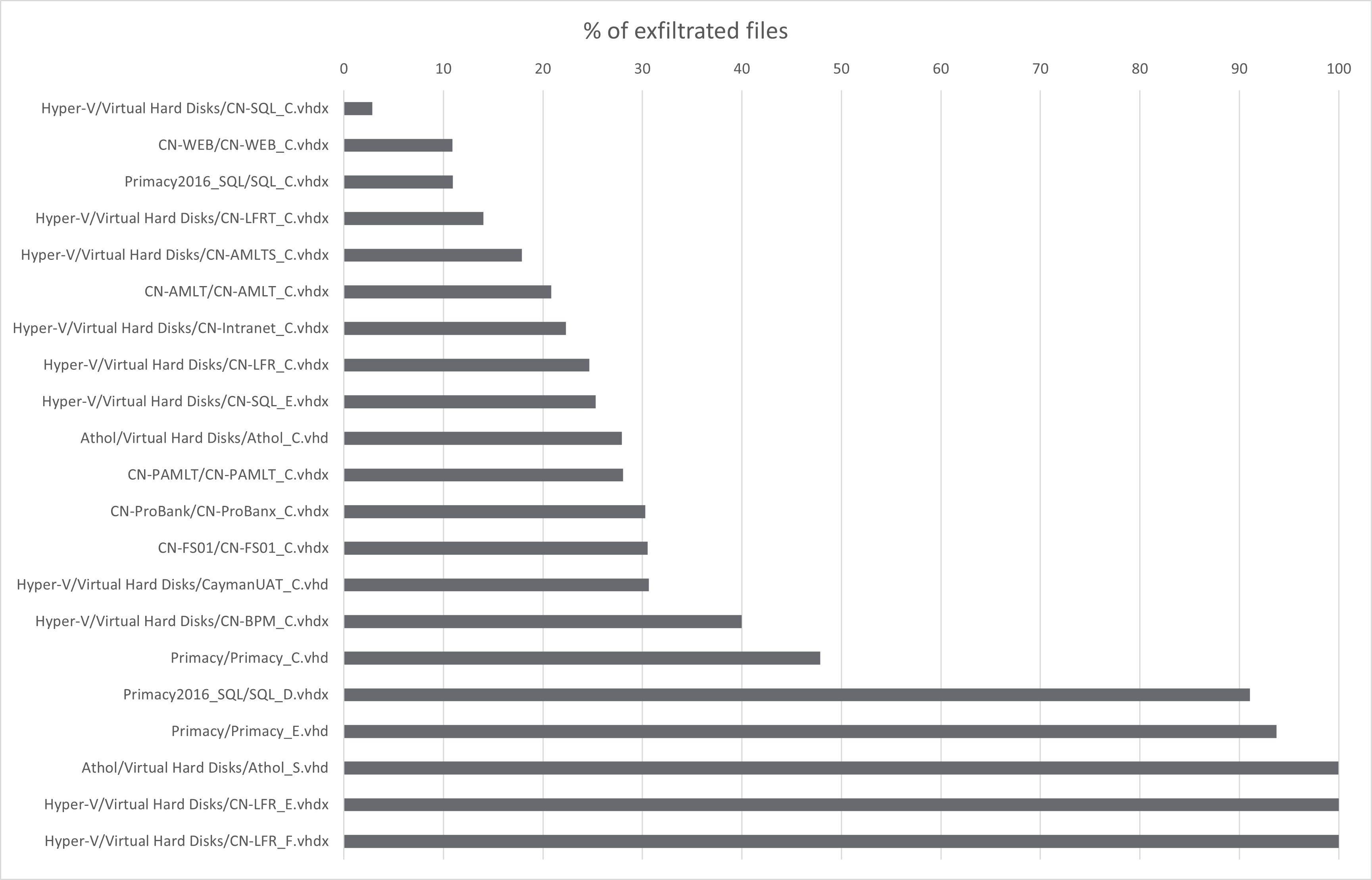 How this affects exfiltration performance?

On the other hand, small files can be read at once (technically in 3 system calls: stat, open and read), while bigger files may need multiple subsequent accesses. In some very specific scenarios, mainly on magnetic drives or slow iSCSI links, and VHDX containers, exfiltration of big files can be very slow, much slower than for small files. However, our experiments clearly showed that most performance peaks and drops, or other performance-affecting anomalies, are faults of qemu, which is very sensitive to problems with VMDK/VHD/VHDX containers, or underlying filesystems, especially when the underlying device has slow or saturated I/O. 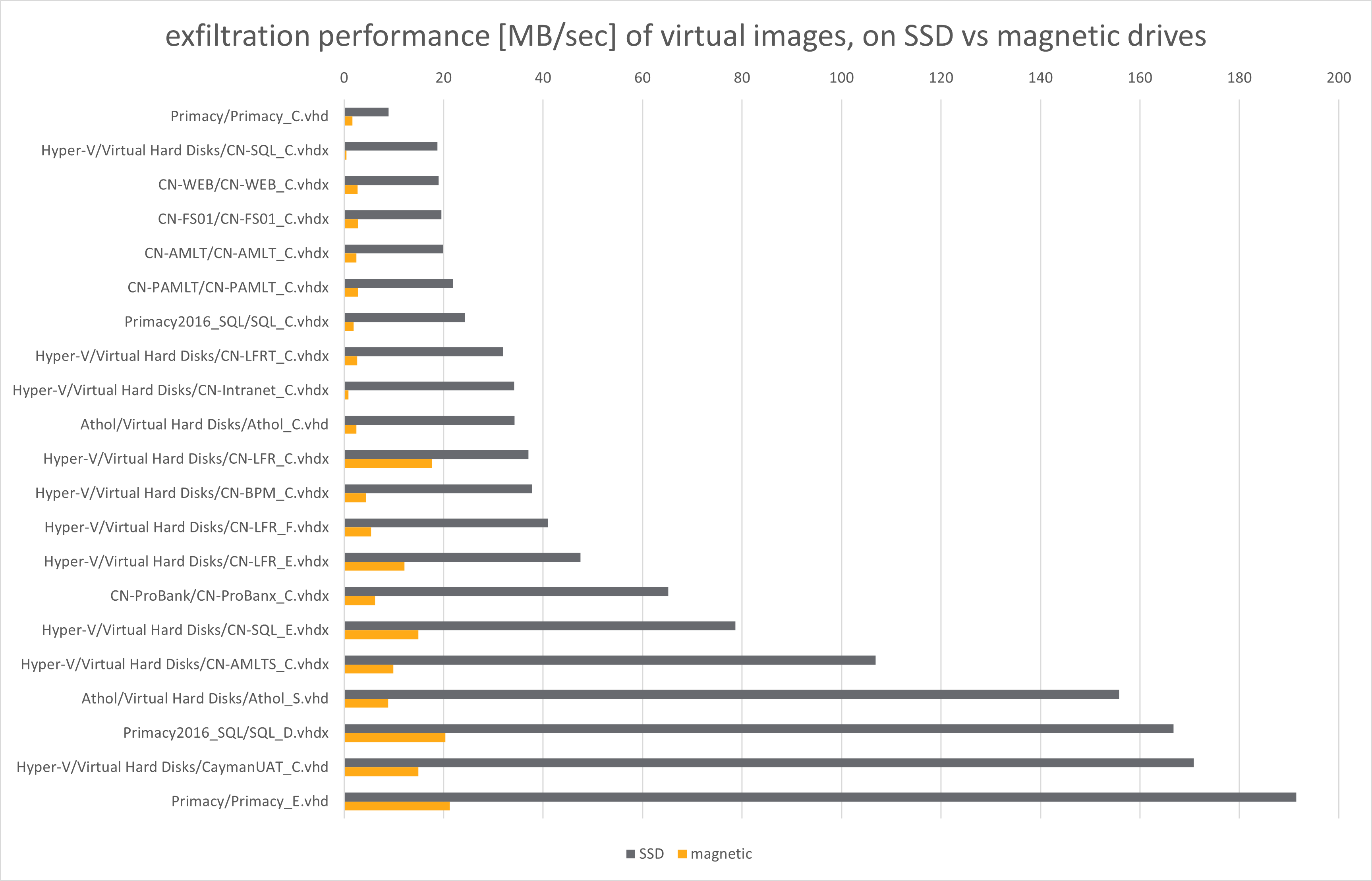 VMDK/VHD/VHDX containers are mounted using FUSE library, and underlying QEMU hypervisor. It is unfortunately not only unstable and very sensitive to many sorts of problems, but also slow. Or, more precisely, it adds huge overhead to each file/directory operation.

This is especially visible for magnetic drives (yellow bars on the above diagram), where exfiltration performance is by average 11.7x lower than for SSD drives - and can be dramatically low for main Windows partitions (eg. CN-SQL_C.vhdx or CD-Intranet_C.vhdx above).

This spreadsheet contains all raw data regarding both source files, and exfiltration process performance.

If you want to discuss these data, or want us to clarify anything that is missing or unclear, please contact us via email in the site footer.